Sabi Sands: The Leopard Viewing Capital of the World 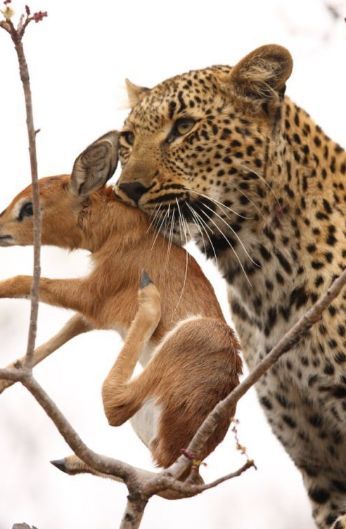 In our opinion, you will not find a more superior place to view a vast array of African wildlife than at the Sabi Sands Private Game Reserve. The Sabi Sands reserve lies directly adjacent to the Kruger National Park. The Kruger is famous for its game viewing, but in being so popular, can become too crowded for our liking and it’s for this reason (and actually a host of others!), we are converts of the Sabi Sands!

There is no fence separating Sabi Sands from the Kruger, and with off-road driving allowed, the Sabi Sands gives the visitor all the action, splendour and wow of the vast Kruger National Park, but without the congestion. Plus there’s the added bonus of countless opportunities to see the animals up close and personal.

The Residents of the Sabi Sands

A fascinating abundance of wildlife call the Sabi Sands home. There’s all the usual suspects like giraffe, zebra, wildebeest, antelope, hippo and warthog (one of our personal favourites, as they tend to be one of the more entertaining of the species). Naturally, it is also home to the Big Five (consisting of elephant, buffalo, rhino, lion and leopard).

But what makes the Sabi Sands extra special, is that it’s recognised as the leopard viewing capital of the world.

The video, below, shows the huge range of African wildlife you can see in the Sabi Sands Game Reserve and Lodge.

The Most Elusive of All

Although quite an elusive creature for the most part in Africa, here in the Sabi Sands it’s not unusual to encounter the leopard/s on most, if not every, safari game drive. The leopard is a largely nocturnal creature (unlike the cheetah) and yet we’ve been fortunate enough to see at least one leopard on each time during our many visits to the Sabi Sands: Read more about what it’s like to visit there.

We’ve come to recognise and now know quite a lot about the lives of many of the leopards who reside in the Sabi Sands Game Reserve, including Kashane; Dewane; Torchwood and Ravenscourt (very impressive males); Tlangisa; Metsi; Tasselberry; Xikavi and the recently passed, Hlabankunzi — and Scotia; Hlabankunzi’s now fully grown daughter, now with a cub of her own. 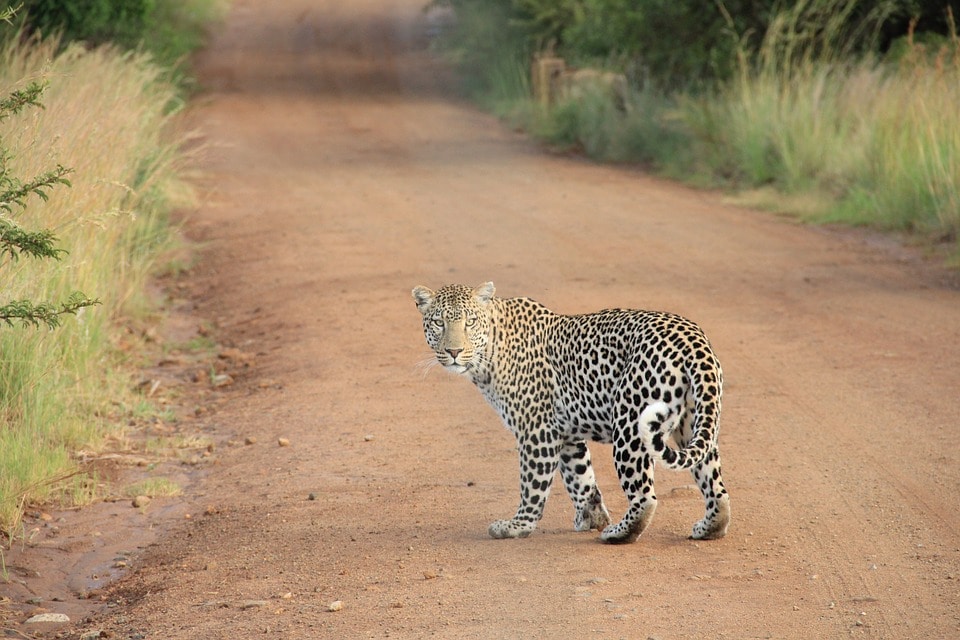 This is an excerpt from John Mitchell Adams during a visit to the Sabi Sands Game Reserve some years ago:

Our next appointment is with a leopard and her three, 7-week old cubs. The two females take fright at the approach of the vehicle and disappear into the long grass, but the tiny little male, with all the fuzz and fluff of infancy stays with a very relaxed mother gorging himself on milk.  The hiding pair sensing mother’s disregard for the vehicle, take her cue and emerge from the grass, sliding into place under mum’s chin with a reassuring lick.

We wish them well as we extract ourselves from our vantage position to make way for another group of eager sight-seers who have been on stand-by for the last 10 minutes.  (Note in the interests of the animals, the Sabi Sands rangers have agreed that only two or three vehicles are permitted on a sighting.)

Some distance away, we come upon a 2-year old leopard, strolling nonchalantly along the road, her shoulders moving rhythmically like pistons.  This is the cub Makwela has just made independent, which means she must now be self-reliant.  She is sniffing up the local news and rubbing her cheeks on various tree branches in an attempt to claim territory.  She needs her own territory now that she must fend for herself.  Unfortunately this area has already been claimed by another leopard as her territory.  Inexperience leads her to challenge the local resident, who happens to be her 6-year old sister and who has been eyeing her suspiciously from her advantaged position on a 3-metre high branch.  Family ties obviously mean nothing to leopards as the challenge is accepted.

Amid growls and yowls, the frenzied pair streak past the Land Rover and its open-mouthed occupants, some of whom had the presence of mind to keep the cameras rolling.  The spectacle ends as quickly as it began with the weaker of the two (the 2-year old) beating a hasty retreat into the bush, leaving us pondering the result of the skirmish.  Has the youngster been fatally injured?  It appeared that neither of the protagonists was holding anything back!

The Uniqueness of the Leopard

Leopards can be recognised by their spotted whisker bases, which along with their rosette patterns (called so because they resemble a rose), are unique to each leopard. They’re skilled and strong climbers who enjoy resting in tree branches during the day, being as they are mostly nocturnal creatures. They are also agile and strong with the strength to carry their prey back up to the trees, away from annoying scavengers like hyenas if need be. Hanging out in the trees during the day provides them with camouflage and a terrific vantage point for resting, but also for viewing from relative safety all that goes on below.

The Threat of their Own

In fact, much of the time, the biggest threat to leopards, besides poachers, is their own kind. Leopards are incredibly solitary and spend most of their lives alone. They each possess their own territory which they mark by scratching on trees and leaving scent marks from their urine and faeces as a warning for other leopards to stay clear. Males and females only cross territories for the purposes of mating.

Female leopards give birth at any time of the year and usually have two or three cubs at a time. The cubs remain with their mothers until about two years of age, when they are old enough to hunt and generally establish a territory for themselves.

Mothers have been known to allow their young into their territory and to cooperatively hunt with them and fathers seem to recognise their offspring. But besides this, there is definitely no love lost from leopard to leopard. Unlike other pride or pack animals, this species carries with it no safety in numbers. They will protect their territory, as we’ve noted, with a fight to the death — even between siblings — if necessary. The average life-span of a leopard in the wild is 12-17 years.

This means that the majestic and elegant female Hlabankunzi, who recently passed away at age 12, had a relatively long life by leopard standards which is testament to her incredible strength of both body and spirit.

If you’re dreaming of a luxury African safari where you get to stay in fantastic lodges, while we take care of all the logistics of getting from accommodation to game drives (where you can see the African wildlife) to airport etc, then read about the experience of our African Safari specialists, what we consider to be a luxury African Safari with 5-star service and then let us know what you’re looking for in your next holiday.

Can’t get enough images of these awe-inspiring leopards? Check out our Leopard videos on our Youtube Channel. See the one of one of the leopards removing the fur off a fresh kill — amazing stuff!

We highly recommend staying at the Savanna Game Lodge in the Sabi Sands and can organise it as part of your African Safari Itinerary. Let us know what you’d like to do and we’ll create an African Safari itinerary for you.

What Do You Really Get in a 5-Star Luxury African Safari?

Other posts in Accommodation