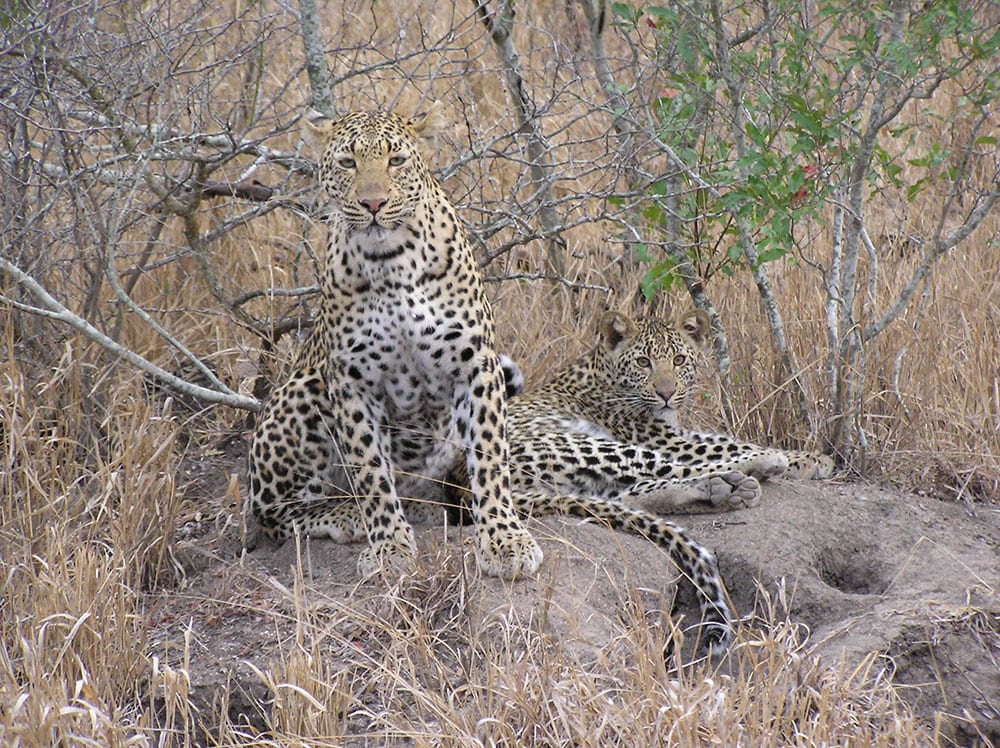 The leopard is the smallest of the ‘big cats’ but is nonetheless extremely agile and powerful and we find ourselves absorbed by this mesmerising creature every time.

Sadly, leopards are another example of a magnificent being that has vanished from at least 49 percent of its historic range in Africa. Leopards are now listed as vulnerable on South Africa’s National List of Threatened or Protected Species (2007). Thankfully, the Convention on the International Trade Endangered Species (CITES) prohibits commercial trade and also limits the export and import of skins and hunting trophies.

Leopards are solitary, territorial animals who meet for the purposes of propagation. Cubs mature at about two years old and become independent of their mothers at which time they must establish a territory for themselves. Mothers have been known to allow their young into their territory and to cooperatively hunt with them and fathers seem to recognise their offspring. Other than that there is no familial love lost among this species!

A Territorial Battle between Sisters

While on safari at the Savanna, we were indeed privileged to witness to a territorial fight between two half-sisters. We came across a 2-year old leopard strolling nonchalantly along the road, her shoulders moving rhythmically like pistons. She had just been made independent and thus in search of a territory of her own, sniffing up the local news and spreading her scent by rubbing her cheeks on various tree branches.

Unfortunately the area had already been claimed by her 6-year old half-sister which her inexperience led her to challenge! The trespasser had been spotted by the local resident from her advantaged position on a 3-metre high branch. Amid growls and yowls, the frenzied pair streaked past the jeep and its open-mouthed occupants, some of whom had the presence of mind to keep the cameras rolling.

The spectacle ended as quickly as it began with the weaker of the two (the 2-year old) beating a hasty retreat into the bush, leaving us pondering the result of the skirmish. Had the youngster been fatally injured? It appeared that neither of the protagonists was holding anything back!

Thankfully the following day we located the vanquished young leopard who seemed to have suffered only a few superficial wounds from yesterday’s skirmish!

The Secrecy of the Leopard

Males tend to have much larger territories than females and generally include the territories of several females.

Leopards are much more secretive and elusive than either lion or cheetah as they prefer rocky and/or densely bushed habitats such as that found along riverbanks. Their lifespan in the wild is between 10 and 15 years

Leopards have the ability to kill animals much larger than themselves and even carry prey three times their own weight up a tree to keep it safe from other non-tree-climbing competitors such as hyena. Being opportunistic, they may kill more than one prey animal at a time and store the prey at different locations, which they can revisit over time.

They are also powerful swimmers, though not particularly fond of water, can run at speeds up to 58 kilometers per hour and are capable of remarkable leaps – over 6 meters!

Leopards have white tipped tails, which can be used to provide cubs with direction when moving through their territory. They have binocular vision and their night vision is six to eight times better than that of humans, assisted in part by the narrow white line under their eyes which helps reflect light.

Although their usual sound is a more rasping noise, the leopard is one of only four cats that can roar! They can also growl and purr (though purring is usually just between mother and cubs!!)

People frequently mix the leopard up with the cheetah; however there are distinctive differences:

However, both cheetah and leopard have a pale blond undercarriage which is designed to dissipate the heat from the ground.

The Sabi Sands is definitely the top destination for African leopard viewing, where we have been fortunate enough to see at least one leopard on every game drive during our visits. Sabi Sands is home to many leopards that we’ve come to know by name here, including Kashane, Dewane, Torchwood and Ravenscourt (very impressive males), Tlangisa, Metsi, Tasselberry, Hlabankunzi who recently passed away, her daughter, Scotia, and Xikavi. We’re able to identify each leopard by their spotted whisker bases, which along with their rosette patterns, are unique to each one. Other private reserves adjacent to the Kruger National Park are also good locations to spot leopard.

If you’d like to know more about having your own authentic African experience, fill out our no-obligation itinerary form with some of your details and preferences, and one of our experienced team members will get back to you shortly.