I am absolutely certain my selection of the second most interesting animal will come as a complete surprise to most people although entertaining would probably be a better description!

Whenever there are warthogs around you will never be bored on African Wildlife Trips! Their constant vigilance must arise from the fact that they represent a very tasty meal (even for humans!) Though I have to admit that since they are my favourite safari animal, they are now (regrettably) excluded from my personal menu – I cannot eat my friends (cantankerous though they might be!)

The warthog, a member of the pig family are so named because of the protective bumps (warts) on their face. With a face only a mother could love, they are so ugly as to be rather cute. As well as their appearance, their curious characteristics include:

Robert the Warthog
They are said to be intelligent animals, as our encounter with Robert, the enormous South Luangwa wart hog seemed to indicate. Because my favourite animal is known to be the warthog (not the most usual choice) my husband called the game vehicle to a halt, which guests are encouraged to do on a private safari. Although the species tend to be skittish in the main (which is understandable given that they are on the menu of just about every predator), Robert kept advancing toward the vehicle! Eventually, much to our surprise, he planted his front hoofs on the floor of the (door-less) passenger seat only to be rejected with “Sorry Robert – not this time.” It appeared that Robert, now very robust adult warthog, was raised by hand as an orphan and released back to the wild. Now takes every opportunity to the good life! However the story does not finish there!

The cover picture of an edition of Africa Geographic was of a well fed warthog who I said, much to my husband’s amusement, looked like Robert! Guess what – it really was Robert! I think being able to identify individual warthogs must surely indicate at the very least an addiction to Africa (which is very hard to avoid!) 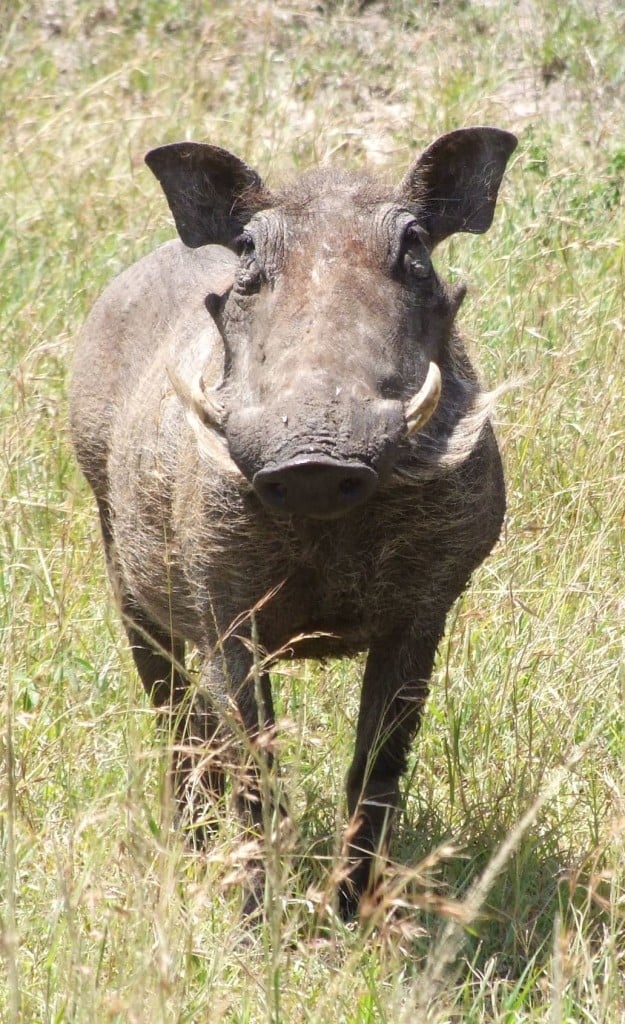 Another Anecdote
On another warthog encounter, the subject of our observation was displaying usual skittish behaviour of running away from the vehicle. Stopping occasionally and turning to determine if his pursuer is still advancing (and thereby potentially losing any advantage they may have gained) only to commence running again in the same direction. The only problem was that he was heading straight towards a couple of interested, though quite perplexed, lions! Thankfully the potential meal received my telepathic message to change direction, just in time, to the disappointment of some less squeamish safari companions.

Where best to find them
Warthogs are found in all national parks and reserves throughout Southern and East Africa. However they usually do not get the attention they deserve and are more often than not just observed in passing. The least skittish warthogs I have come across seem to be very much at home on the lawn of the beautiful Victoria Falls Hotel in Zimbabwe.
Robert lives (hopefully the present tense is still the correct one for him) in the South Luangwa National Park in Zambi