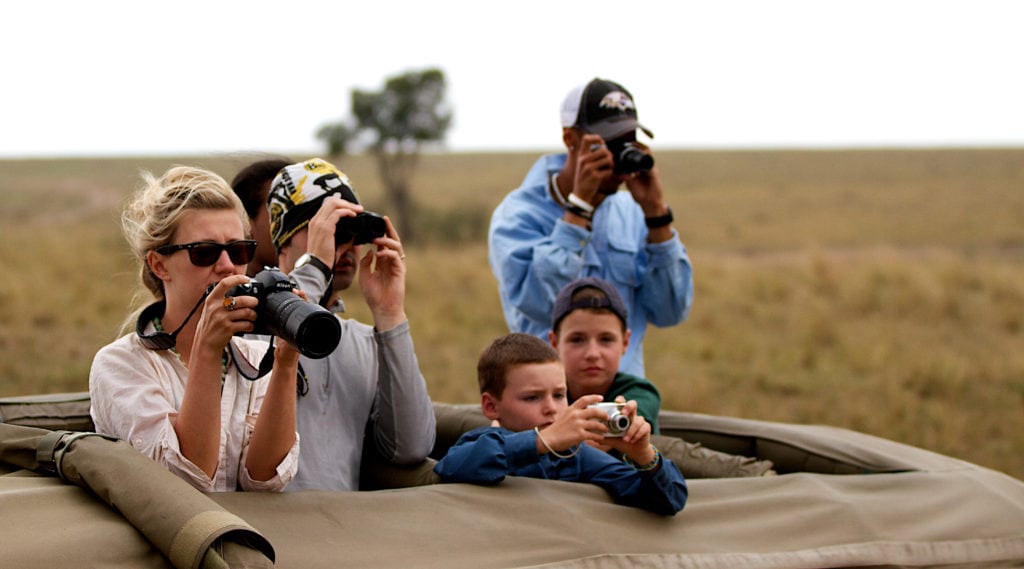 The locals of Cape Town really know how to throw a party and therefore Cape Town is truly one of the best places to see wild life (as in life at its wildest!) However, if it’s wildlife you’re wanting to see, more than “wild life”, then it really doesn’t get any better than the Sabi Sands Private Game Reserve.

Those of you familiar with Destinations Africa will know that the Sabi Sands Private Game Reserve is a favourite of ours‘. The Sabi Sands is located adjacent to the well known Kruger National Park. In the absence of a fence, the animals don’t know whether they are in the Kruger or the Sabi Sands (well, we think they don’t!) but guests surely do, as the private reserve is much less crowded. Off-road driving is also permitted which makes it much more possible to get up close and personal with the wildlife.

The Sabi Sands features a huge diversity of game; including all the usual suspects like giraffe, zebra, wildebeest, antelope, hippo and warthog (one of our personal favourites, as they tend to be one of the more entertaining of the species). Naturally, it is also home to the Big Five (consisting of elephant, buffalo, rhino, lion and leopard) in spades.

In fact, the Sabi Sands is recognised as the leopard viewing capital of the world and it’s not unusual to encounter this elusive creature on most if not every game drive.

The Sabi Sands is also a very accessible wildlife safari destination because of South Africa’s great transport infrastructure. The lodges are, in the main, at the higher end of the comfort scale, but there are a few at the three star level.

The Sabi Sands is also great value for money as the charges are in South African Rand. The Rand has been weak against most first world currencies for some time. In addition the park fees are a fraction of those charged in East Africa. The downside is that because it is such an outstanding wildlife safari destination, it is sometimes a real battle to find availability.

So if you want the best, the best thing to do is to arrange your wildlife safari well in advance. However, if your dates are set and you are having availability problems, then the next best thing is to direct your attention to one of the neighbouring private game reserves.

These include the Timbavati or the Manyleti which, like the Sabi Sands, are free of fences with the Kruger and each other (and indeed the Sabi Sands) so the animals can move freely between them all.

Of course, we can take care of all of this for you at a cost that we find is usually cheaper than if you were to arrange it yourself. See our pricing and more about why we only specialise in tailor made safaris rather than one-size-fits-all group tours.

Another good place to see wildlife and to add some variety and into your wildlife safari is Hwange National Park in Zimbabwe. Because it is still trying to shed the shackles of a despotic regime, Zimbabwe is also good value for money with a relatively short flight from Johannesburg.

Hwange is a comfortable (and safe) three-hour drive south of Victoria Falls. So a few days in a different wildlife safari location can be combined with a few days in the adventure capital of Africa. This, believe it or not, will have the effect of stretching your holiday dollar (as non-safari accommodation is much cheaper!)

The Masai Mara in Kenya and the Serengeti (its Tanzanian equivalent which is actually part of the same tract of land divided by a political border) offer a completely different wildlife experience to that of the greater Kruger area.

The attractions here are the vast migrating herds of wildebeest and zebra. Obviously this moving delicatessen attracts an array of carnivores, particularly lion, cheetah and jackal.

To a far lesser extent you may see leopard, but as we discovered after a leopard-free 19 days, you either need to be lucky to find a leopard or know where to look! In our case it was the latter, complements of one of the most exceptional game rangers we have ever come across. Indeed that one day we encountered two leopards as well as two different lion prides!

The Benefits of a Local Game Guide

Our conclusion? It pays to get a local guide where possible! By local we mean employed by the lodge at which you are staying. We must add, where possible, because, unlike their Southern African equivalents, many East African lodges do not offer “game packages.” Game packages are essentially game drives in their own vehicles with their own game rangers.

However if you do need to “bring your own transport”, then whatever you do, do NOT travel in a mini-van (called matatus in Kenya). These minivans almost always seem to be driven by ignoramuses who, instead of tracking animals, track 4×4 WDs (driven by more enlightened safari personnel who are more in sync with the wild life!)

But make no mistake, while thousands of wildebeest and zebra gathered together in one place represents an amazing sight, it takes a strong stomach to witness them crossing the river. The reality is there is a great deal of breaking necks, backs and legs as they tumble down the bank and try to scramble up the opposite, sometimes completely vertical riverbank (wildebeest are not good planners).

The stench of the carcasses of those who fail to make the crossing can be quite overwhelming. Having said that, a river crossing is not an everyday event. In fact, many wildlife safari goers who aspire to witness the amazing phenomenon of the migration never experience a dramatic river crossing. Depending on what you can tolerate, this is a plus or a minus!

Top Hotels To Stay At When Visiting Cape Town

The Diversity of Africa and her Endangered Species