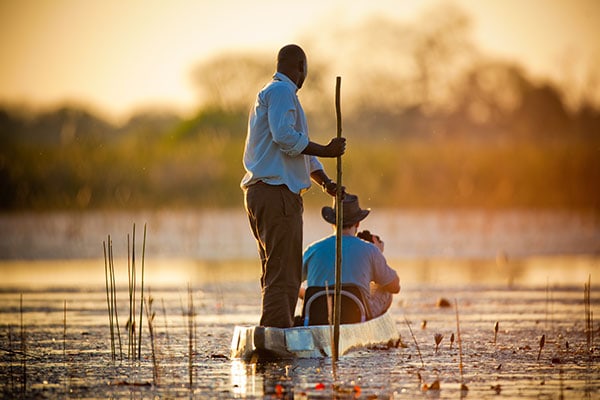 The Okavango Delta is located in north-west Botswana and we can introduce you to this natural wonder during one of our private Botswana safaris.

We’ve written previously about the Okavango Delta, including the best time to visit it and why. We believe it’s optimal to go there from May (it’s not high season, so less expensive and comfortable weather wise) — but even later in the year up until about October, as it gets warmer and drier, you can still view a wide variety of African wildlife which gather at the delta.

This world heritage-listed site is made up of permanent marshlands and seasonally flooded plains. As a wetland maze of lagoons, lakes and hidden channels, it’s unique in that it’s one of the very few major interior delta systems that doesn’t flow into a sea or ocean.

Once a year, during the dry season, the Okavango Delta is flooded by the River Okavango. As such, the native plants and animals have synchronised their biological cycles with these seasonal rains and floods. It’s truly an example of nature at its finest, demonstrating the wondrous interaction between climatic, hydrological and biological processes — and like so much of Africa — a photographer’s dream.

The Wildlife of the Okavango Delta

But many more mammals depend on the Okavango Delta for their water supply. For those travellers intent on viewing Africa’s famous Big Five here, four of the Big Five can almost always be seen, with elephant and buffalo spotted on land and from the water.

There are also loads of herbivores around, the most common swamp-adapted animal being the red lechwe antelope that can be seen wading through water in big herds. Other unusual antelope include Tsessebe, Sable, Roan and the rare Sitatunga.

The proliferation of herbivores naturally attracts the big carnivores. Among the predators frequently viewed here are lion, spotted hyena, leopard and wild dog. The Okavango Delta is also home to some of the world’s most endangered species of large mammal, including the cheetah, white rhinoceros and black rhinoceros, but sighting these can be a bit hit and miss.

Getting Around the Okavango Delta

Experience the wonders of the Okavango Delta and Botswana as part of one of our extraordinary package holidays to Africa. We are specialists in Australian custom-made trips to Africa. Don’t think it is unaffordable: see what we can do for you.

Enjoying the Creature Comforts While on Safari