When my African-born husband suggested our very first safari together, I had visions of demountable tents, rock hard beds, pretty ordinary food, a blizzard of insects and, lastly, but most concerning of all to me, potential exposure to my nemesis, snakes.

Being of completely reptile-paranoid Irish extraction, I have taken every precaution over the last 30 years in the snake capital of the world, Australia, to avoid exposure to these legless creatures. But an African wildlife safari package from Australia — wouldn’t that be an open invitation for such encounters? Thankfully I was wrong on all counts!

The World’s Most Comfortable Tents

Although much of the African safari accommodation tours, packages and private holidays are described as tented, tented accommodation in Africa is of a completely different species!

Certainly, while luxury African wildlife safari accommodation may include some canvas, the dwelling is usually a permanent, fixed establishment with all the mod cons — even air conditioning. The beds are usually enormous, king-sized and luxuriously festooned with pillows and cushions and protected by mosquito nets. 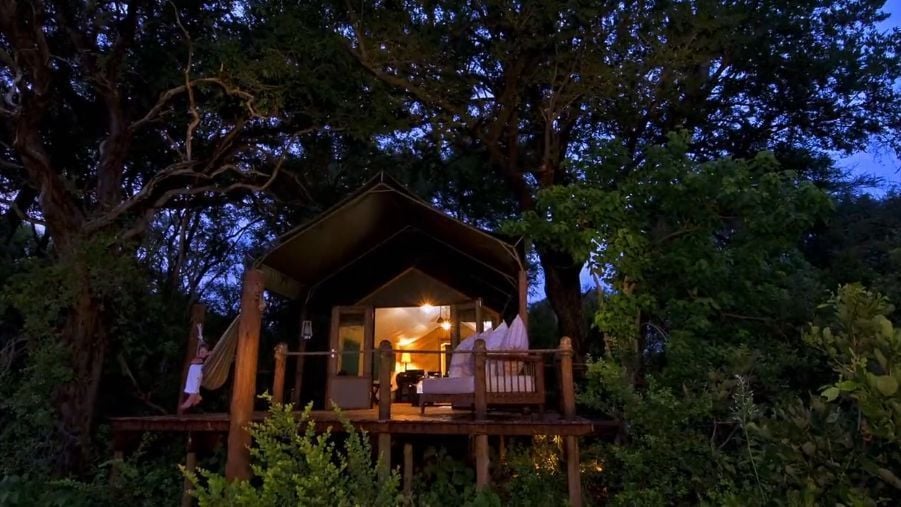 The Challenge to Desist

As for African food, rather than a dearth of appetising food, the challenge when on safari holiday in Africa is to resist overindulging in the delicious native cuisine. No matter how remote, a luxury wildlife safari kitchen always seem to produce copious amounts of the most amazing fare.

These safari kitchens can also accommodate just about any dietary restriction imaginable; including gluten free, dairy free, vegetarian, vegan, low salicylate, low amine and more. While I am not celiac, I am intolerant to gluten and so on one luxury wildlife safari, I made the mistake of requesting a gluten-free diet.

I say it was a mistake because in the absolute wilds of Botswana, I was presented with a huge array of gluten-free options at every “food” opportunity. On safari, this means pre-morning game drive, coffee break, brunch, afternoon tea, sundowners and dinner! Even I, with my healthy appetite, just couldn’t do it justice – I felt very apologetic!

The insects were no more numerous or dangerous than in Australia. Any nominal risk of contracting malaria can be easily countered with malaria prophylactics and copious amounts of insect repellent. Indeed, if the mosquitoes are anything like their Australian cousins, they will be particularly partial to Irish blood!

As for snakes, we did not find a single snake in that first wildlife safari — not that I was looking for one! Despite numerous subsequent safaris, we have only ever encountered two. Even these two were only while we were safely ensconced in the game vehicle – where I remained despite the curiosity of fellow guests!

I’m not willing to test out my friend’s thesis that they are more afraid of me that I am of them – but then she doesn’t know just how paranoid I am – even snake “tracks” on the dusty road are enough to make me shiver.

So, in summary, what can you expect from a luxury African wildlife safari? Discover a chance to get away from it all into a world filled with surprise and wonder; a world which time seems to have forgotten, but which still features all the mod-cons that make our lives more comfortable.

If you’d like to know more, fill out our no-obligation itinerary form with some of your details and preferences, and one of our experienced team members will get back to you shortly.

Our Pick of the Top 5 African Safari Lodges

5 Great Things To Do In South Africa

Other posts in Preparing for a Safari